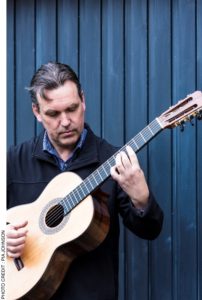 Ken Murray is one of the most recognisable player-composers in Australia, renowned for virtuosic performances of his own poetic musical landscapes, as well as his extensive collaborations in new music. Ken has also championed and recorded Spanish music from the early twentieth century, and has been active as a performer of Brazilian and South American musical styles. This program celebrates both Ken’s Australian musical visions and the Hispanic legacies of the contemporary classical guitar.

Ken Murray has developed a career as a guitarist combining performance, composition, teaching and research. He completed the PhD at the University of Melbourne, researching the Spanish guitar in 19C Britain, and is Senior Lecturer and Head of Guitar at the Melbourne Conservatorium of Music.